A New Era for Global Film and TV Content Licensing 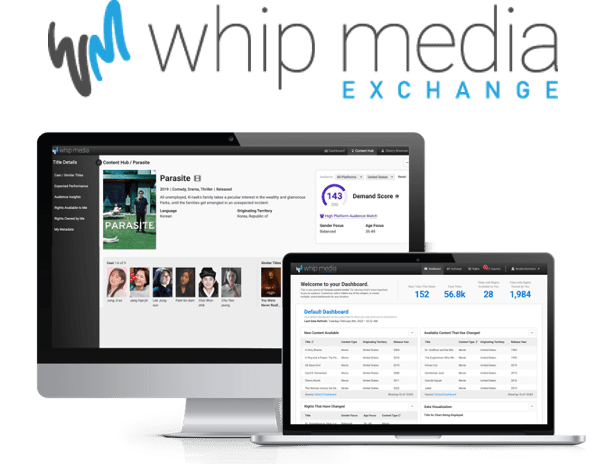 The entertainment industry has changed profoundly in just the last few years – and at Whip Media, we’ve seen it firsthand.

Since founding the company in 2014, the media landscape has shifted considerably. The clearest example has been the rise of streaming, which has made it easier for TV and movie fans to watch (and binge) their favorite content on their time. Eight years ago, this was still a novel concept; in 2014, only 16% of U.S. homes had two or more streaming services. Today, that same figure is approaching 60%, while nearly 80% of U.S. homes pay for at least one SVOD service. Streaming’s expansion has been just as explosive in markets outside the States, too. In short: streaming is big – and it’s here to stay!

One of the best aspects of this shift is that audiences are exposed to more content from outside their home countries than ever before. For TV and movie fans, that’s a great thing. And you don’t need to look much further than “Squid Game” for confirmation, with the South Korean Netflix series becoming a global phenomenon last fall and gaining millions of fans around the world.

While this shift has benefited viewers, it’s also created a challenge for platforms. The stakes have been raised – to gain and keep viewers, platforms have to find compelling content that will appeal to their distinct audiences. That’s easier said than done.

Fortunately, the Whip Media Exchange, which launched in beta last year, is a game-changer when it comes to global content licensing – and we have some big news to share on that front.

The Exchange is a next-generation data and AI-powered content marketplace that streamlines and simplifies the content licensing process through a variety of features. One facet I want to stress in particular is the sheer breadth of content covered by the Exchange. Content buyers and sellers using The Exchange now have the ability to compare the predicted performance of a movie or TV series against hundreds of thousands of new and library titles worldwide. That applies to content with rights listed in the Exchange, as well as content that’s available on streaming platforms today but not listed for sale in the Exchange.

This is a groundbreaking tool that allows Exchange customers to both research and make better-informed content choices for their platforms. How does it do this? By offering key insights on important audience characteristics, including the age and gender of likely viewers, key indicators such as Territory and Platform fit, as well as similar titles that may appeal to their audience. This proprietary and market-leading data helps make it quicker and easier for customers to evaluate what content to buy or sell, and where. The Exchange also, of course, incorporates workflow tools to make content licensing and delivery easy and efficient.

The backbone of the Demand Score and the Exchange overall is Whip Media’s consumer sentiment and engagement data from 21 million TV and movie fans around the world. This data-driven foundation provides a unique score for each film and TV title on the Exchange – allowing customers to predict how content will perform in a particular territory and on a particular platform.

As I mentioned earlier, the volume of content now available can be almost overwhelming. This doesn’t just create a challenge, though; it also creates an opportunity for platforms to stand out from the pack by adding shows and movies that will make viewers gravitate towards their services – and not their competitors.

The Exchange, by connecting buyers and sellers in a centralized platform, is designed to make content planning, licensing, localization and fulfillment as seamless as possible. No more guessing games. Exchange customers can now make informed, data-backed decisions on hundreds of thousands of titles. This really separates the Exchange from other content markets as well as data providers – and will allow customers to tackle this new era of content licensing with greater confidence and fewer headaches.

Lastly, I want to thank and congratulate our stellar Whip Media team for their tremendous work in getting the Exchange to this point. This is a real milestone for our company, and our team has done a great job of listening to our beta clients over the last 10 months, making sure the Exchange is ready for its commercial launch.

If you’d like to find out more, check out the Exchange here.