‘Falcon And The Winter Soldier’ Captures 23% Of All Streaming Views Opening Weekend: Report

Well, Disney has already said that Falcon and the Winter Soldier is its biggest debut on Disney Plus ever, even more so than The Mandalorian, but since this is the streaming age, that did not come with any actual numbers.

As it’s getting harder to track data about streaming shows and movies, we’ve seen a rise in tracking services that aim to do just that. One of them is TV Time, which claims to bet the largest such service with 16 million users feeding them data. And this week, they’re backing up those Disney claims with some data of their own.

According to TV Time, Falcon and the Winter Soldier was responsible for nearly a quarter of all streaming video viewing in the US during its opening weekend. As in like, not just on Disney Plus, but everywhere. Here’s the chart: 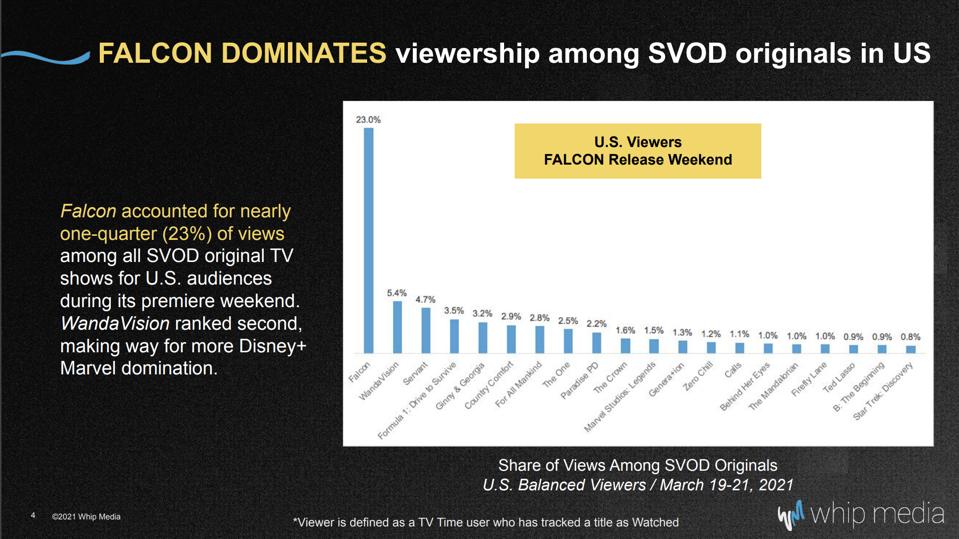 Other shows that made the list include WandaVision, showing that it’s still incredibly strong two weeks after its finale, Servant, where the horror show’s finale aired on Apple TV Plus this week, and Formula 1: Drive to Survive which had its third season premiere this weekend on Netflix, where all episodes were released at once.

TV Time does note that Wandavision grew more interest during its debut weekend than Falcon in the Winter Solider, however, 111% versus 78%, though WandaVision did have two episodes out that first weekend as opposed to Falcon’s singular premiere.

Falcon and the Winter Soldier was also popular in Europe, the number one show in England, Germany and Italy, and the number two show in France and Spain.

We’ll see how Falcon and the Winter Soldier performs over the course of its short lifespan. Unlike WandaVision, the show is only six episodes long (as opposed to WV’s nine), but the episodes themselves should be longer, resulting in the same amount of running time overall. I believe Loki, set to premiere in June after Falcon and the Winter Soldier wraps, is also six episodes. As of yet it’s unclear if all of these series are getting second seasons, or if they’re just one-offs as Disney has a ton of series like this lined up into the indefinite future.

For now, we’ll concentrate on the six we have ahead of us. This week, we didn’t even have Falcon and Bucky meet up, so I expect that will change this coming Friday because I mean, there are only five episodes to go now. We’ll see how the viewing numbers hold up in week two.