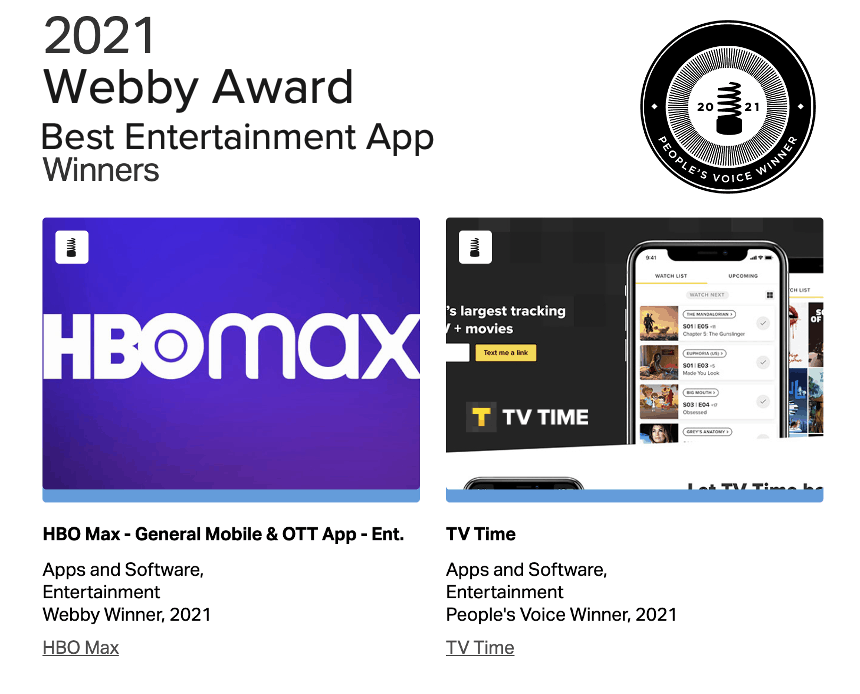 TV Time is the world’s largest TV and movie tracking app providing insights for today’s television landscape. Every month, 2.5 million people use TV Time daily to keep track of the shows and movies they’re watching, receive tune-in reminders, discover what to watch next, and where to watch it. TV Time is a global community of 16 million users who have reported more than 19 billion views of TV and movie content.

“TV Time has set the standard for innovation and creativity on the Internet,” said Claire Graves, Executive Director of The Webby Awards. “It is an incredible achievement to be selected among the best from the 13,500 entries we received this year.”

“We’re honored to find ourselves in the company of apps developed by entertainment leaders including HBO Max, Disney, and MTV, and thrilled to win a Webby’s People’s Voice award,” said Maren Ziobrowski, VP of Product and Marketing for Whip Media. “The win is even sweeter as we were voted the best app by the millions of TV Time users worldwide.”

Winners were announced on Tuesday, May 18, 2021, and honored in a star-studded, virtual show that will be available on demand. The celebration was hosted by multi-talented actress, writer, podcaster, host and advocate Jameela Jamil. Winners had the opportunity to deliver one of The Webby Awards’ famous 5-Word Speeches. Past 5-Word Speeches include Steve Wilhite’s “It’s Pronounced “Jif” not ‘Gif’; NASA’s “Houston We Have A Webby”, and Solange’s “I Got Five On It.