Audiences Want to See ‘Black Widow’ in Theaters, But May Not Stick Around After

For more than a decade, the United States box office has been a massive $10 billion-plus industry, including a record $11.8 billion in 2018. Obviously, the COVID-19 pandemic torpedoed that momentum with the box office sinking to historic lows last year. As we celebrate recent theatrical rebounds, it’s important to remember we’re still not remotely close to any sense of financial normalcy.

Despite the inflated box office numbers of the last ten years, domestic movie theater ticket sales have actually declined since a new century high of nearly 1.6 million in 2002. Getting people into movie theaters become more difficult with the rise of at-home entertainment in the early and mid-aughts and has now been compounded by the pandemic and all the resulting shifts in film distribution. Yet Marvel’s Black Widow appears to be the top film viewers are willing to venture back into theaters for—though that enthusiasm may not last for other features.

Surveys are always an elastic set of representative data, subject to the whims of respondents presented with somewhat hypothetical scenarios. They should not be treated as hard science and fact capable of predicting market trends. But as we continue to find ourselves in unprecedented circumstances that force us to reevaluate and reimagine our standard metrics and benchmarks with which we examine the industry, we must be willing to expand our purviews to better assess the near-term future.

TV Time, a Whip Media company, conducted a survey to gauge how consumers feel about the summer movie experience. The findings are based on a survey of 1,904 consumers from April 28-29, 2021. 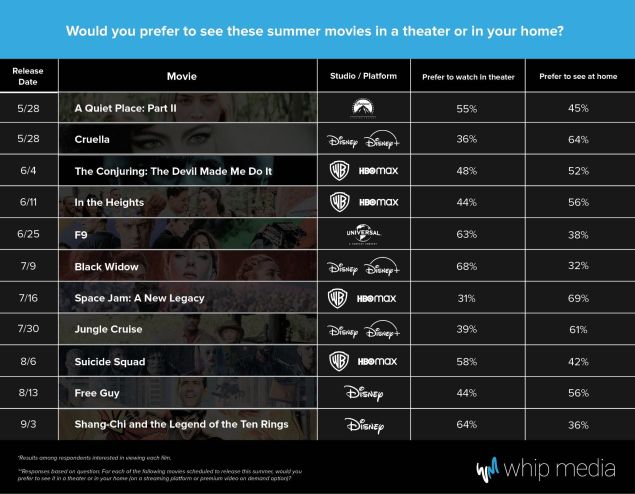 With a handful of summer movies arriving in a crowded and compressed schedule boasting same-day premieres in theaters and streaming platforms such as Disney+ Premier Access or HBO Max, TV Time asked consumers (who said they are interested in seeing the movie) where they preferred to watch it. The survey found:

According to box office firm The Numbers, Black Widow is projected to score a $63 million opening and a final domestic haul of $170 million. Meanwhile, fellow firm Box Office Pro believed Black Widow stood a chance at a domestic total of $125 million or more in its original May 7 release. With a day-and-date PVOD release for the MCU’s first film in two years and greater competition, projections aren’t as confident.

Overall 90% of TV Time’s survey respondents said they plan to return to the movies. 28% are already going or ready to go as soon as theaters nearby open. However, overall sentiment for a return to exhibition is far lower than it was at the same time last year. This raises the question of how sustainable enthusiasm may be after consumers have become accustomed to even greater instant gratification throughout the pandemic. 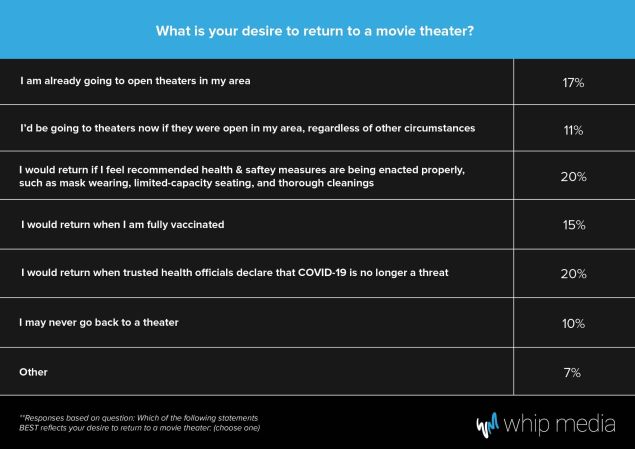 Despite this willingness to return to theaters, the widespread availability of movies at home has resulted in a fundamental shift—at least for now. Whip Media surveyed U.S. consumers in both April 2021 and April 2020 to gauge their feelings about returning to theaters and found double the number of people said they will see movies in theaters less often than a year ago.

Among respondents who intend to return to theaters:

Among respondents who said they will go to the theater less:

The survey also found that families have fueled a 35% growth in PVOD over the last year, which studios are leveraging with key family-oriented titles released day-and-date this summer.

We’ve said repeatedly in our coverage of the film industry over the last 15 months that movie theaters will never go extinct. There will always be demand to experience big budget blockbusters on the big screen in a communal viewing environment. But the breadth of what types of films receive splashy exclusive theatrical rollouts will continue to narrow as the pandemic accelerated Hollywood’s direct-to-consumer emphasis.

We’ve already seen every major film studio reach window-shortening deals with major exhibitors that will result in new films arriving on at-home platforms sooner and in greater numbers. Again, we can’t take surveys as gospel; a small sample size does not reflect widespread trends. But it’s clear that audience viewing habits have changed over the last 15 years, punctuated by the pandemic. The industry is just going to have to continue changing with it.